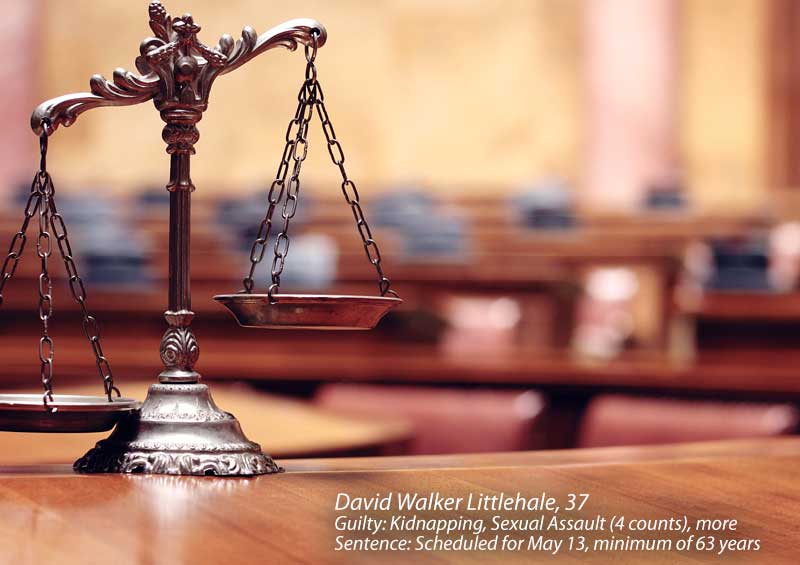 Yavapai County Attorney Sheila Polk thanked the victim for her bravery and assistance with the prosecution of the defendant.

The case stems from the afternoon of October 18, 2019, when the victim was walking to a friend’s house after she missed the school bus from Prescott High School.  Littlehale, a registered sex offender, tried to convince the victim to get into his car.  When she refused, Littlehale grabbed her by her arm, put his hand over her mouth so she could not scream, and forced her into the vehicle.  Littlehale then began punching the victim.  When Littlehale arrived at his residence, he dragged the victim out of the car, into the residence, and began punching the victim repeatedly all over the body.  Littlehale repeatedly sexually assaulted and beat the victim for approximately two and a half hours.  While being beaten and choked, the victim fought back for her life and was able to stun Littlehale. The victim was eventually successful in escaping out the back door of the residence, running into a neighbor’s house that was unlocked, and hiding in a laundry room.  After nearly 45 minutes, the victim heard a female voice and felt safe enough to alert the female of her presence.  The neighbors called 911.  Littlehale took the victim’s clothing and placed the items in his vehicle, drove his vehicle away from his residence and left his vehicle at another location.  Then Littlehale returned to his residence.  Prescott Police Department SWAT was deployed and Littlehale was taken into custody.

Steve Young, the prosecutor on the case, thanked the jury and stated: “Detective John Hanna, Jr. and the Prescott Police Department conducted an excellent investigation.  I appreciate the hard work and service of the jury.”

Sentencing is scheduled for May 13, 2021 at 3:00 p.m. before the Honorable Krista M. Carman of the Yavapai County Superior Court.  Littlehale is facing a minimum of 63 years in the Arizona State Prison.

Sheila Polk, Yavapai County Attorney, thanked the victim for her bravery and for cooperating with the prosecution of the defendant. “The reality is we cannot successfully prosecute these cases without the testimony of the victim yet, as one can imagine, it is incredibly difficult to recount for a jury the details of a sexual assault.” To speak to someone about sexual assault, the public can the National Sexual Assault hotline at 800-656-HOPE.