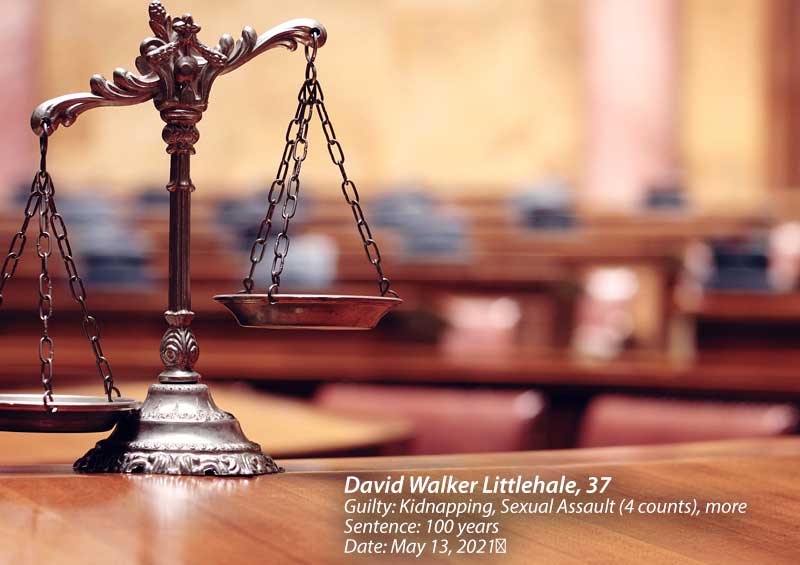 On Thursday, May 13, the Honorable Krista M. Carman of the Yavapai County Superior Court sentenced David Walker Littlehale, 37, of Prescott, to 100 years in state prison.

The crimes occurred on the afternoon of October 18, 2019, when the 15-year old Prescott High School student was walking to a friend’s house after missing the school bus. Littlehale, a registered sex offender, tried to persuade the victim to get into his car.  When she refused, Littlehale grabbed her by her arm, put his hand over her mouth so she could not scream, forced her into the vehicle, and began punching her. When Littlehale arrived at his residence, he dragged the victim out of the car and into the residence, repeatedly punching her.  For the next two and a half hours, Littlehale brutally beat and sexually assaulted the victim in multiple ways. The victim fought back for her life and eventually escaped out the back door of the residence, running into a neighbor’s house that was unlocked, and hiding in a laundry room.  After nearly 45 minutes, the victim heard a female voice and felt safe enough to alert the female of her presence.  The neighbors called 911.  Littlehale took the victim’s clothing and placed the items in his vehicle, drove his vehicle away from his residence, left his vehicle at another location and returned to his residence.  Prescott Police Department SWAT was deployed and Littlehale was taken into custody.

The case was presented to a Yavapai County jury beginning on April 5, 2021. On April 8, the jury found Littlehale guilty of Kidnapping, four counts of Sexual Assault, and Tampering with Physical Evidence. The jury also found several aggravating factors, including two prior felony convictions and Littlehale was on felony probation at the time of the crimes. Judge Carman sentenced Littlehale to 20 years prison on each count of Sexual Assault and Kidnapping, consecutive time, and 4 years on the Tampering charge, concurrent time.

Yavapai County Attorney Sheila Polk praised the courage of the young victim and her strength in testifying during the jury trial. She also commended the Prescott Police Department, and deputy county attorney Steve Young for their diligent investigation and prosecution of this case.

Polk reminds the public of the services of the Yavapai Family Advocacy Center that provides advocacy and counseling for victims of sexual assault, domestic violence, and child abuse/child sexual assault/molestation. The Center works closely with law enforcement to support the investigation of interpersonal crimes. The number for the Family Advocacy Center is (928) 775-0669.