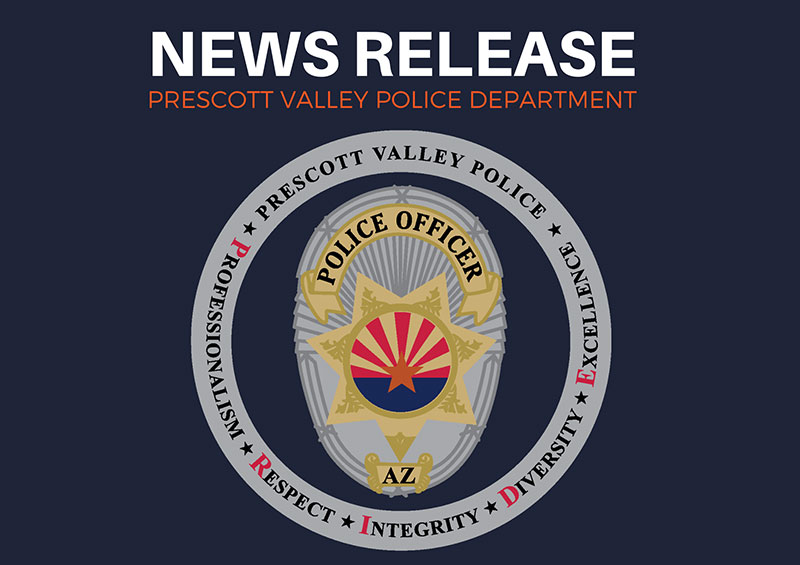 In May, a Prescott Valley officer deployed his K-9 in order to subdue a subject.

Official Prescott Valley news releases are below, as well as the video from a member of law enforcement. Remember, this happened in May.

In response to incomplete information that is being put out on social media regarding the arrest of Alfredo Saldivar in May 2020, the Prescott Valley Police Department is providing this accurate depiction of the events as they transpired to provide clarification and transparency.

On Wednesday, May 13, 2020 at approximately 6:32 PM, Prescott Valley Police were notified by Prescott Police that a red Chevrolet truck was travelling eastbound on State Route 69 at a high rate of speed, entering Prescott Valley.

As the truck entered Prescott Valley near Stoneridge Drive, the vehicle was intercepted by Prescott Valley Police officers using emergency lights and sirens, at which time the driver, later identified as Alfredo Saldivar, failed to stop.

During this time multiple officers observed Saldivar continue to drive erratically at speeds in excess of 100 miles per hour throughout residential streets and highways within Prescott Valley town limits, with reckless disregard for the safety of others. Based on officers’ and numerous witness observations, officers began stopping traffic at intersections to prevent accidents from occurring as Saldivar continued to travel into oncoming traffic in an erratic manner.

As Saldivar continued to evade police, he drove northbound on Lake Valley Road, then made a U-turn, jumping the median separating north and southbound lanes. He then attempted to ram a southbound Prescott Valley Police officer’s vehicle.

The officer, who feared for his life, then fired his department issued weapon several times, striking Saldivar and his vehicle. Saldivar then continued to drive southbound on Lake Valley Road, then westbound on State Route 69 toward Glassford Hill Road, where he struck another vehicle and injured an elderly woman. The elderly woman was transported to the local hospital and treated for non-life-threatening injuries. As a result of the collision, her vehicle was totaled.

Saldivar then continued westbound on State Route 69 into Prescott city limits, where he abandoned his vehicle at Frontier Village Shopping Center, located at 1841 E. State Route 69 in Prescott, and fled on foot through the shopping center.

During this time the Prescott Valley Police Department, supported by other law enforcement agencies, arrived on scene to attempt to apprehend Saldivar, who was fleeing on foot and believed to be armed.

As officers confronted Saldivar and gave the him numerous verbal commands to surrender, it initially appeared he was complying, then hesitated. Saldivar’s hesitation and the observations made by police led officers to believe that he was going to flee from law enforcement again, which resulted in a Prescott Valley Police K-9 being deployed.

The K-9 deployment resulted in Saldivar being taken into custody. He was then transported to Yavapai Regional Medical Center West campus located in Prescott, Arizona for non-life-threatening injuries, where he refused medical attention.

The Arizona Department of Public Safety Special Investigations Unit was contacted and asked to investigate the incident leading to Saldivar’s arrest.

Saldivar was later transported and booked into the Yavapai County Detention Facility located in Camp Verde, Arizona on charges of Endangerment, Aggravated Assault upon Law Enforcement, Criminal Damage, Unlawful Flight, Leaving the Scene of an Accident, and Resisting Arrest - all felony charges.

No officers were injured in the incident.

The Prescott Valley Police Department is currently in the process of conducting an administrative review regarding the use of force upon Alfredo Saldivar.

Diana Saldivar De Sotelo, who says on Facebook that she is Saldivar’s sister, wrote, "The following video shows my brother Alfredo Saldivar after being captured by police in Prescott Valley, Arizona. He was involved in a high-speed chase. He fled in fear for being an undocumented immigrant….Our family is appalled with the situation. We do not justify his behavior, but the way these officers let him be brutally attacked is absolutely disgusting!”

From the Prescott Valley Police Department: Original press release from May 14.

UPDATE 5-14-2020
Police have identified the suspect in an officer involved shooting on 5-13-2020 as Alfredo Saldivar, 28. Saldivar was arrested and booked into Yavapai County Jail on felony charges of Endangerment, Aggravated Assault upon Law Enforcement, Criminal Damage, Unlawful Flight, Leaving the Scene of an Accident, Resisting Arrest. Saldivar is being held without bond

ORIGINAL RELEASE
On Wednesday, May 13, 2020 at approximately 6:32 PM, Prescott Valley Police were notified of a vehicle which had failed to yield to a Prescott officer just moments prior on Highway 69 in Prescott. As the vehicle, a Chevrolet truck, entered Prescott Valley at Stoneridge, the driver once again failed to stop for police. The vehicle’s driver continued to drive erratically throughout Prescott Valley at speeds reaching 120 miles per hour. Officers began stopping traffic at intersections to prevent accidents from occurring as the driver continued to drive into oncoming traffic.

As the driver drove northbound on Lake Valley, he made a U-turn and attempted to ram a Prescott Valley police officer’s vehicle. The officer, who feared for his life, fired upon the suspect. The suspect then drove towards Glassford Hill Road and Highway 69 where he struck another vehicle and caused minor injuries to the sole occupant of the vehicle. The suspect continued driving into Prescott where he abandoned the vehicle and fled on foot in Frontier Village Shopping Center located at 1841 E. State Route 69 in Prescott. A Prescott Valley Police K-9 was deployed and located and subdued the suspect. The suspect was placed into custody and transported to YRMC West campus for non-life-threatening injuries.

Arizona Department of Public Safety Special Investigations Unit arrived on scene to conduct the investigation.
No officers were injured in the incident.