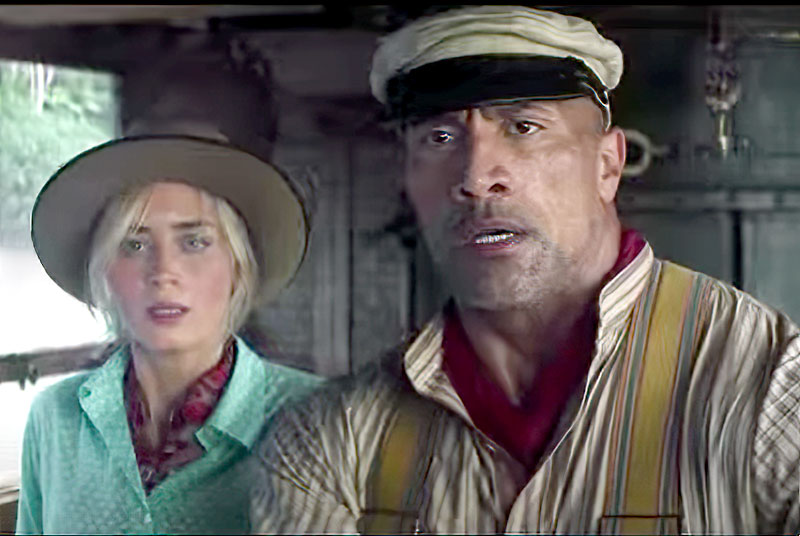 This is a great movie to watch.

When Disney lines up at the plate and spends $200 million to make a movie with two of the most popular stars of the day it is time to look for a long, high home run. Think of the power and popularity of “Pirates of the Caribbean” for example. “Jungle Cruise” might not quite reach that exalted height but man o man, we have a great time watching.

From the very beginning, we get swept up in the color, charm, and exuberant beauty of the cinematography, as we should with a Disney movie. Early on we get the treat of a long, detailed, and beautiful shot of London's Trafalgar Square that teems with 1916 style life and action. From then on we know we have picked something special to watch.

For my money, this is the best acting job that Dwayne Johnson has done to date. He will never be put in the same sentence as Sir Lawrence Olivier but he is noticeably better here. He also gets to tell a string of corny jokes, puns taken from the actual puns mandated for the pretend boat captains on the “Jungle Cruise” rides at the Disney theme parks.

After seeing Emily Blunt as a haggard, harried mother in two “A Quiet Place” movies it pleased me no end to see her in full movie star perfection. She looks great in “Jungle Cruise” as an eccentric English professor. Her acting is also perfect, as we would expect from her.

Helping out in a small role we get the wonderful Paul Giamatti as a loud, bombastic scoundrel.

Particularly in this movie we notice and are moved by the soaring score made by James Newton Howard. If that name does not ring a bell for you, his many many movie scores will come to mind. He has made the music for dozens of films including “The Hunger Games.” “The Bourne Legacy,” and the films of director M. Night Shyamalan.

“Jungle Cruise” runs for two hours and seven minutes. This PG-13 family-friendly, four sawblade, film will please one and all. There is a subtle fart joke at the beginning of the movie that older kids and grown-ups will enjoy but no bad language or naked people. This is Disney family-friendly.

The four sawblade film was filmed on location in Hawaii with more shooting done on a sound stage in Georgia. We can't really tell and the kids surely will not be able to tell the real from the computer-generated.

Watching it in 3-D was a hoot as big snakes and such seem to fly right up to you.

We enjoy the experience of sitting in a dark theater, having popcorn, and watching movie stars ten feet tall make us laugh or cry or just ponder some esoteric thought. In the current day, that experience has come into danger. In its opening weekend “Jungle Cruise” made a tidy $36 million at the North American box office. It also made an additional $30 million in streaming for home viewers. How much longer will the theaters be there for us?