Flags @Half-Staff in Honor of US Capitol Police Officers Featured 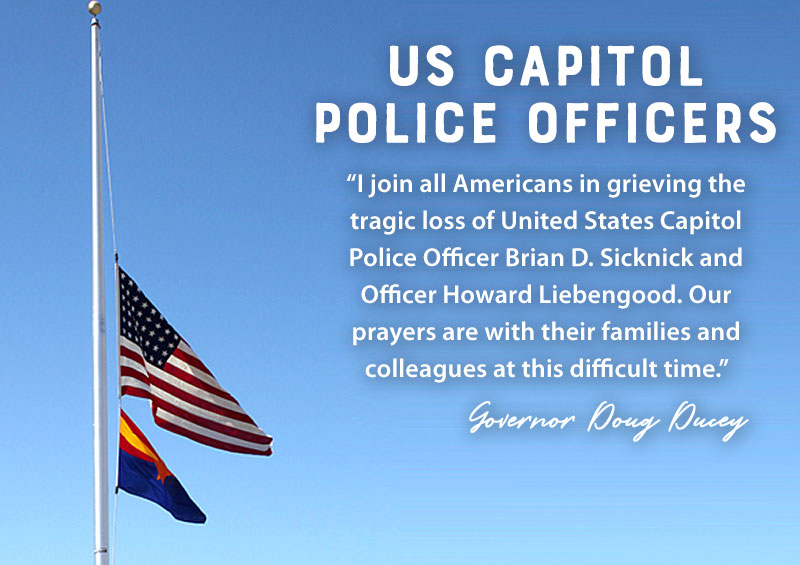 All flags at half-staff

PHOENIX — Governor Doug Ducey today ordered flags at all state buildings be lowered to half-staff to honor the lives of United States Capitol Police officers who died this week. In coordination with the federal proclamation, flags will be lowered to half-staff through Wednesday, January 13 at sunset. Individuals and businesses are encouraged to participate in this tribute.

“I join all Americans in grieving the tragic loss of United States Capitol Police Officer Brian D. Sicknick and Officer Howard Liebengood. Our prayers are with their families and colleagues at this difficult time.

“Arizonans, like all Americans, were shaken by the horrific events that unfolded at the United States Capitol on January 6. The rioting and violence that took place in Washington D.C. was shocking and unacceptable. We condemn it in the strongest terms.

“Officers Sicknick and Liebengood were tasked with protecting the living symbol of our democratic form of government. They will be foremost in our thoughts as we vow to recommit to our shared values as Americans and to making sure something like this never happens again. In coordination with the federal proclamation, I am ordering flags at all state buildings to half-staff.”