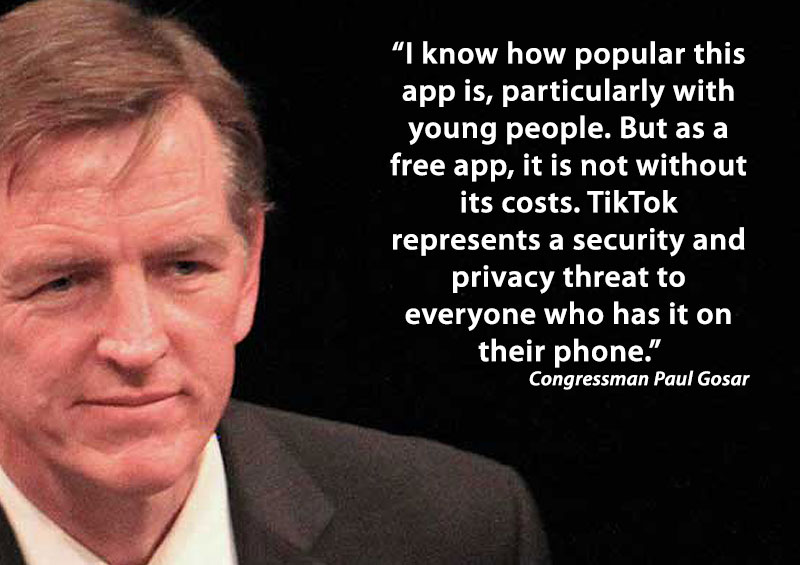 Gosar Seeks Ban on TikTok, describing it as Chinese spyware

WASHINGTON, D.C. - Today, U.S. Congressman Paul A. Gosar, D.D.S. (AZ-04) sent a letter to Attorney General William Barr, along with two dozen other House members, supporting a ban on the Chinese Communist Party backed app known as TikTok. The app, marketed by Apple and other mobile app providers, records key strokes, can remote access cameras and microphones, track locations, and collects all data posted on the platform. In short, it is classic spyware that has been downloaded by millions of Americans and is available for analysis, blackmail and influence by the backer of TikTok, the Chinese Communist Party.

“I know how popular this app is particularly with young people. But as a free app, it is not without its costs. TikTok represents a security and privacy threat to everyone who has it on their phone. Apple and other companies need to do a better job of vetting apps on their mobile devices. Apple has enabled the largest downloading of spyware in American history. We need to remedy this,” said Gosar.

The letter was signed by 25 members of Congress and sent to the Attorney General on July 15th.

The letter can be viewed here:

Please join us on Social Media: