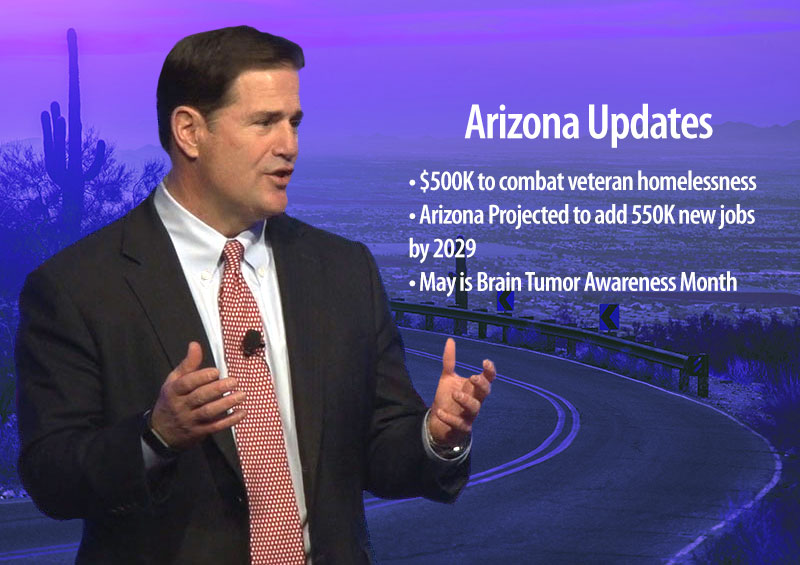 Here’s a roundup of news from Governor Ducey’s Office.

This announcement comes on the first day of Tom Simplot’s new role as Director of the Arizona Department of Housing (ADOH) and follows Wednesday’s announcement of $508 million in new federal funding to address homelessness and housing instability throughout the state.

“We need to make sure we’re taking care of those who have done so much to protect our nation,” said Governor Ducey. “Yesterday, I appointed Tom Simplot to Director of the Arizona Department of Housing to strengthen our state’s efforts to combat homelessness and housing instability. Today’s funding takes these efforts a step further in supporting Arizonans, while ensuring veterans in need have safe housing. I’m grateful to Director Simplot for his leadership on this issue and to all Arizonans who are working hard to help those who served our nation.”

Earlier this year, the City of Phoenix purchased a property in Downtown Phoenix to expand housing opportunities for Arizona veterans experiencing homelessness. The $500,000 from the State will allow the United States Veterans Initiative (U.S. Vets) to complete the immediate health, safety and occupancy needs for their program and operations to move to the new facility later this year.

“Veteran homelessness is a national problem that we’re tackling head on in Arizona,” said ADOH Director Simplot. “Providing veterans with resources, shelter and protection is a must — and I’m proud that this is the first project I’m taking on as Director. I am grateful to Governor Ducey and U.S. Vets for their work to support veterans experiencing homelessness in Arizona.”

ADOH will continue to work with U.S. Vets to ensure a smooth transition as they enter the new facility.

“We are so excited and grateful to Governor Ducey and the Arizona Department of Housing,” said U.S.VETS – Phoenix’s Executive Director Michelle Jameson. “This is a big step forward for our mission to end veteran homelessness.”

U.S. Vets in Phoenix was created to provide housing and services specifically designed for homeless and at-risk veterans and their families. Since its inception in 2001, it has served more than 10,000 veterans with approximately 250 veterans currently living in the organization’s facility and other supportive housing units. It is the nation’s largest provider of housing services for homeless veterans and their families.

Today’s funding for U.S. Vets to combat homelessness and housing instability among veterans comes from the Crisis Contingency and Safety Net Fund.

The new initiative is one of many put in place to support Arizona veterans and their families. On April 15, the Governor signed legislation to prevent veteran suicide and ensure veterans receive the support and resources they need.

PHOENIX — The Arizona Office of Economic Opportunity is projecting the state will add more than half a million jobs over the next eight years, continuing a surge in economic growth.

“Arizona has become a jobs magnet,” said Governor Doug Ducey. “Not only are jobs booming, wages are rising faster at one of the fastest rates in the country. Our recovery is moving forward and there is more opportunity before us than ever before.”

According to the Office of Economic Opportunity (OEO), Arizona will add nearly 550,000 jobs by 2029 for an annualized job growth rate of 1.6%, four times the U.S. growth rate.

The OEO projections come as Arizona is experiencing an explosion of advanced manufacturing in industries like semiconductors and electric vehicles.

“Today’s projections show Arizona is going to continue to lead the nation as a destination for employment and advanced industries,” said President & CEO of the Arizona Commerce Authority Sandra Watson. “What this means is more jobs for Arizona residents and more opportunity throughout our economy.”

When it comes to electric vehicles, companies like Lucid, Nikola, ElectraMeccanica, which all have set up manufacturing facilities in the state, are projected to add thousands of jobs in coming years. These announcements mean more jobs for suppliers and support industries as well.

In March, the Governor announced personal income in Arizona rose last year at a rate faster than nearly any state in the country, according to estimates from the Bureau of Economic Analysis. With a personal income growth rate of 8.4%, Arizona tied with Montana for the fastest rate of growth in personal income in 2020.

PHOENIX — Governor Doug Ducey declared May to be Brain Tumor Awareness Month to promote education of the condition, recognize the medical professionals who combat the issue, highlight the significant progress in research, and honor the families who have been impacted.

“Brain tumors affect countless people each year, and impact the lives of not only the individual, but their loved ones as well,” said Governor Ducey. “Nearly three years ago, we lost an Arizona giant, statesman and war hero to Glioblastoma — Senator John McCain. His is just one of the many precious lives lost. It’s important to spread awareness of the impact brain tumors have on patients and their families, and to honor those who have fought hard and are continuing to fight every day.”

Brain tumors are among the deadliest forms of cancer, with a relatively 36 percent five-year survival rate following the diagnosis. An estimated 700,000 Americans are currently living with a primary brain tumor.

Arizona is home to the Ivy Brain Tumor Center at Barrow Neurological Institute, the largest brain tumor center in the world. The center was helped established by the Ben & Catherine Ivy Foundation, which focuses on funding research and discovering new treatments for patients with brain cancer. In April 2020, the Ivy Foundation donated $5 million to the AZ Coronavirus Relief Fund to fund the purchase of personal protective equipment and support mitigation efforts.

View the proclamation HERE and below.

Twitter
Rate this item
(0 votes)
Last modified on Friday, 07 May 2021 02:35
Published in Arizona News
Tags
« For Sale: One Exhibition Center Big Investments in I-40 »
back to top