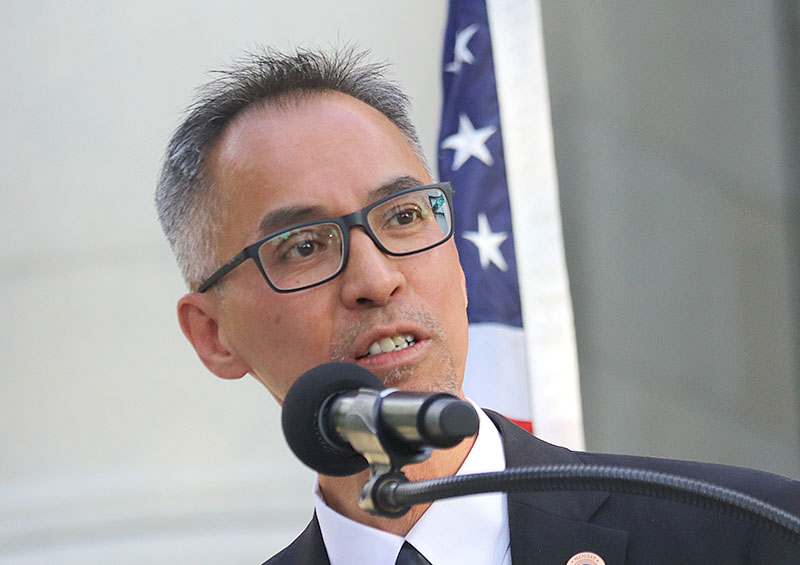 STATE CAPITOL, PHOENIX – A legislative proclamation sponsored by State Representative Quang Nguyen was read today on the floor of the Arizona House of Representatives calling on U.S. Senator Mark Kelly (D-Ariz.) to recuse himself from the upcoming vote on the confirmation of David Chipman, nominated by President Biden to serve as the Director of the Bureau of Alcohol, Tobacco, Firearms and Explosives (ATF):

Whereas, the State of Arizona has a rich history of protecting and supporting the Second Amendment to the Constitution of the United States, which protects the individual right of the people to keep and bear arms; and

Whereas, Arizona has a long tradition of firearms ownership and is home to a robust community of world-class firearms businesses and training programs that continue to grow stronger each year; and

Whereas, President Joe Biden has nominated David Chipman to serve as Director of the Bureau of Alcohol, Tobacco, Firearms and Explosives, also known as the ATF; and

Whereas, David Chipman has had an extensive career of working with organizations whose mission is to erode the Second Amendment and criminalize law-abiding Americans; and

Whereas, David Chipman currently works as a Senior Policy Advisor at Giffords, a gun control pressure group, founded by U.S. Senator Mark Kelly and his wife, former Congresswoman Gabrielle Giffords, to aggressively advocate for radical action, including a ban on commonly owned semi- automatic rifles and the imposition of ruinous legal liability on firearm-related companies; and

Whereas, starting in 2012, David Chipman began working for Mayors Against Illegal Guns (later a component of Everytown For Gun Safety), an extremist anti-firearms organization bankrolled by billionaire Michael Bloomberg, whose aim is to put up every barrier possible to prevent law-abiding citizens from exercising their constitutional right to firearm ownership and use; and

Whereas, the founding of the United States did not begin with the federal government, but rather with the states themselves; and

Whereas, an agency of the federal government should never seek to expand the mission of an administrative state, much less seek to eliminate the Second Amendment of the Bill of Rights;

Oppose the confirmation of David Chipman as director of the Bureau of Alcohol, Tobacco, Firearms and Explosives. Chipman has established by his long career in anti-gun advocacy and lobbying that he is an ideologue for his radical cause and will not serve to uphold the Constitutional rights of Americans while in this office, but rather to erase rights to fit the radical gun control agenda of the groups he still works for and associates with to this day.

Demand U.S. Senator Mark Kelly recuse himself from a confirmation vote. Chipman’s current employment at Giffords, an organization co-founded by Senator Kelly, raises serious ethical questions regarding this vote and presents a clear and credible conflict of interest that puts the constitutional rights of Americans in jeopardy.

Quang Nguyen is a Republican member of the Arizona House of Representatives serving Legislative District 1, which includes Prescott, and portions of Yavapai and Maricopa Counties. 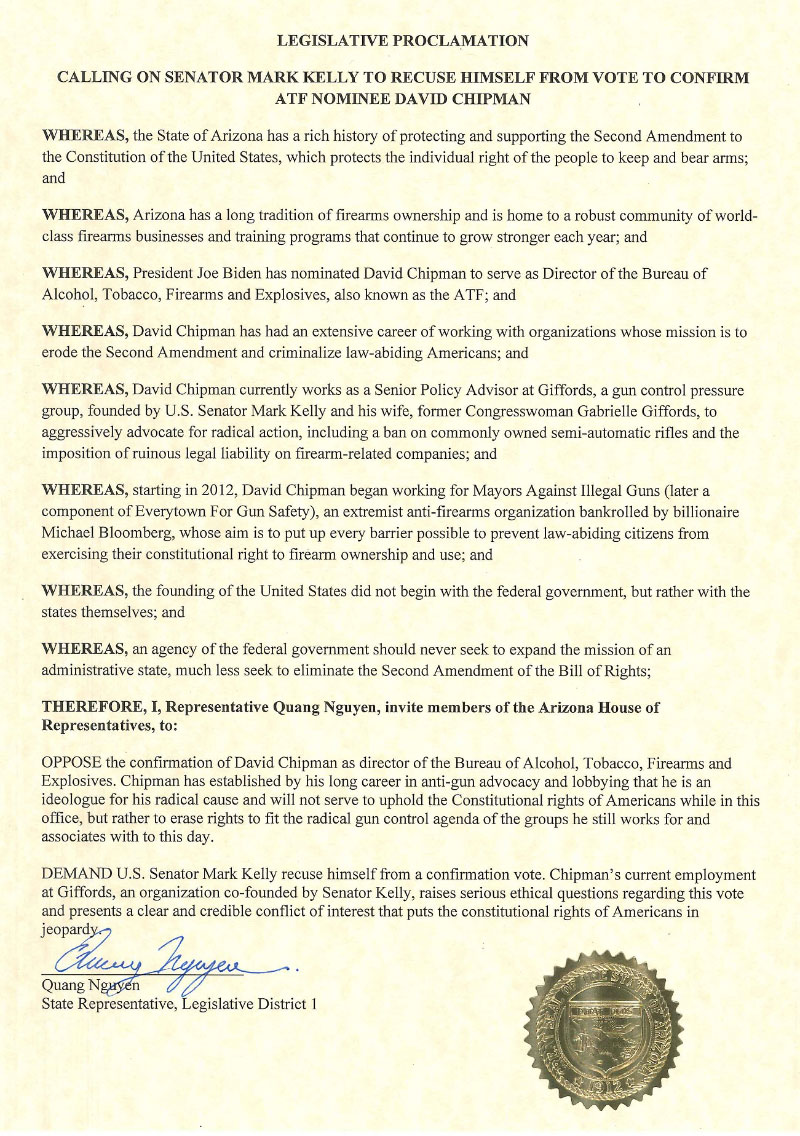