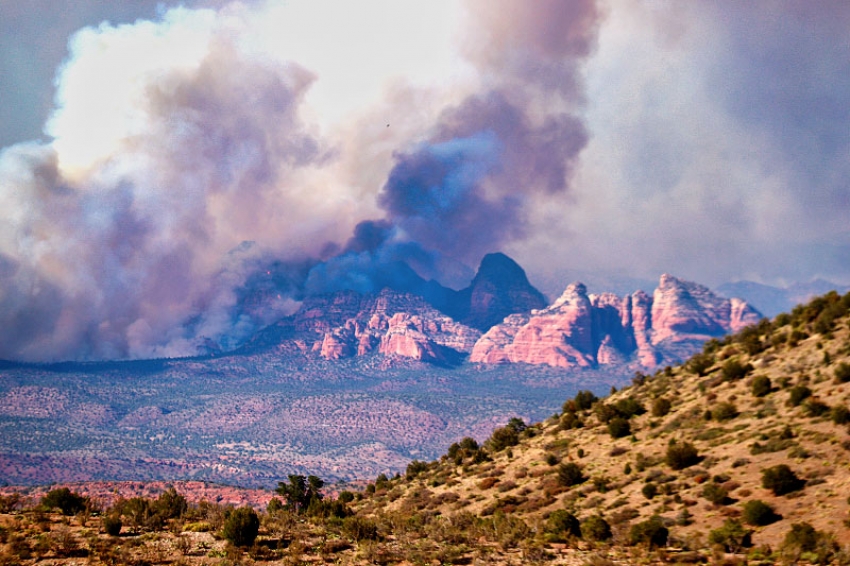 The Type 1 Incident Management Team has assumed management of the Rafael Fire.

The Rafael Fire has advanced into Sycamore Canyon and moved on top to the Mogollon Rim on both the Kaibab National Forest on Sycamore Point and Coconino National Forests near Casner Mountain. On the Prescott National Forest, the southwest corner of the fire has not advanced west or south for the last two days. Yesterday to the north on the Kaibab and Coconino National Forests, fire crews identified road systems to utilize as fire line to stop the spread north and westward towards identified values at risk. On the southeast portion of the fire in Sycamore Canyon and the Red Rock Secret Mountain Wilderness, crews are identifying fire line locations for direct and indirect suppression actions.

Personnel from the incoming Southwest Area Type 1 Incident Management Team 2 shadowed members of the Arizona Central West Zone Type 3 Team to transfer information and gain situational awareness of the Rafael fire. Type 1 Team 2 assumed management of the fire this morning at 6 a.m. Today, the fire is expected to move north in Sycamore Canyon near Dorsey Spring and east into Red Rock Secret Mountain Wilderness area, where vegetation and topography are in alignment. Fire fighters on the north end of the fire will continue with suppression efforts and prepare for future firing operations using road systems and natural features and will utilize aircraft to support these actions. In the Red Rock Secret Mountain Wilderness area, fire crews will continue to scout for future suppression lines.

“GO” in Coconino County, areas around Sycamore Canyon and SOUTH of Forest Service Road 535 off FS 231. In Yavapai County, some rural ranches in the area of North FSR 525 and Bill Grey Road, West of Sedona.

“READY” -none at this time. Notifications can change rapidly. Residents in areas affected by the fire should remain vigilant and be prepared to evacuate. Evacuation notifications are issued when danger is imminent and life threatening.

All State Land is under Stage 2 restrictions effective 8 a.m. on June 11. 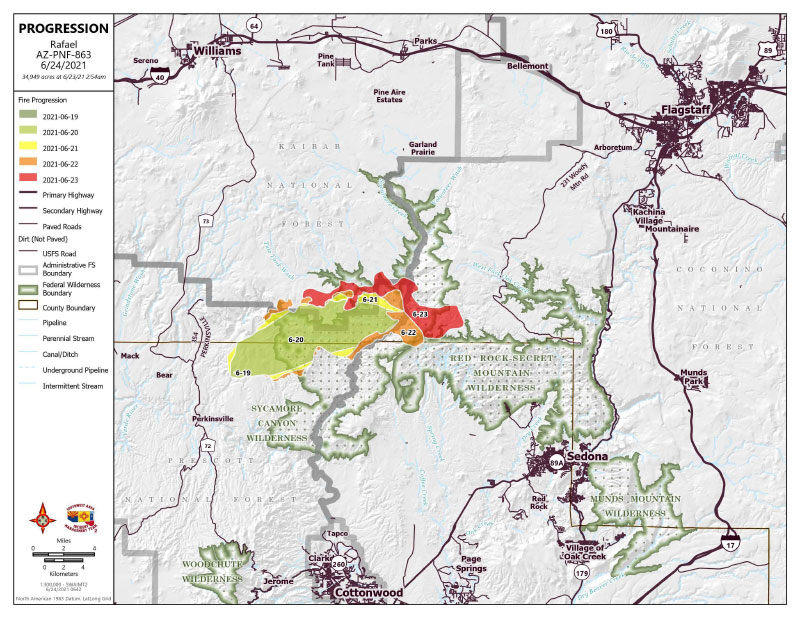 The five fires being managed by the Arizona Central West Zone Type 3 Incident Management team are the following from north to south - all acreages are approximate and current as of 6/23, 20:00:

Location: North of Paulden, AZ and west of HWY 89

Prescott, Ariz. [June 24, 2021] – The moisture and higher relative humidity subdued fire behavior on all 5 fires. Crews were able to get 100% containment on the Red Hat and Limestone Fires, and 42% containment on the Spring Fire. Crews will continue to patrol and monitor both the Silent and Rock Butte Fires. Interior fuels on the Spring Fire continue to burn and smoke may be visible.

Yesterday’s storms brought some much-needed relief for crews on the Rock Butte Fires. With considerable rain and lightning on the fire area, crews were brought off the line for their safety. This gave them a chance to regroup physically and mentally. This reprieve gave the crews the opportunity to recharge their stamina for both this assignment as well as the next assignment.

Management of the Rafael Fire has been transitioned to a Dave Bale’s Southwest Area Type I Incident Management Team 2 which will be based in Flagstaff.

WEATHER: Cloudy throughout the day. Day time light winds gusting to 20 mph with a 40% chance of precipitation. Day time temps around 83, relative humidity 26% and showers and thunderstorms are expected midday with possible gusty erratic winds.

FIRE RESTRICTIONS: Stage 2 Fire Restrictions remain in effect on the Prescott NF, until the full closure is implemented tomorrow.

Email for Rock Butte Fires: This email address is being protected from spambots. You need JavaScript enabled to view it. 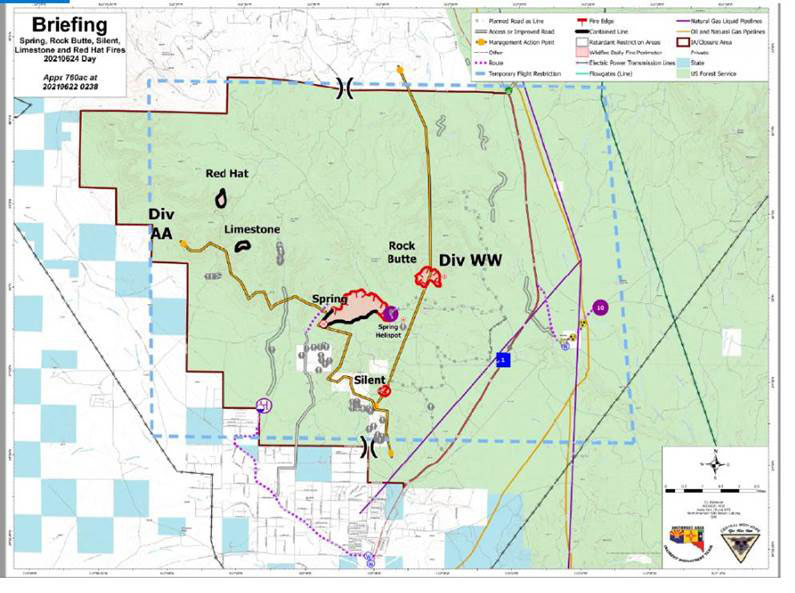