Guess What You're Not Getting for Christmas? Featured 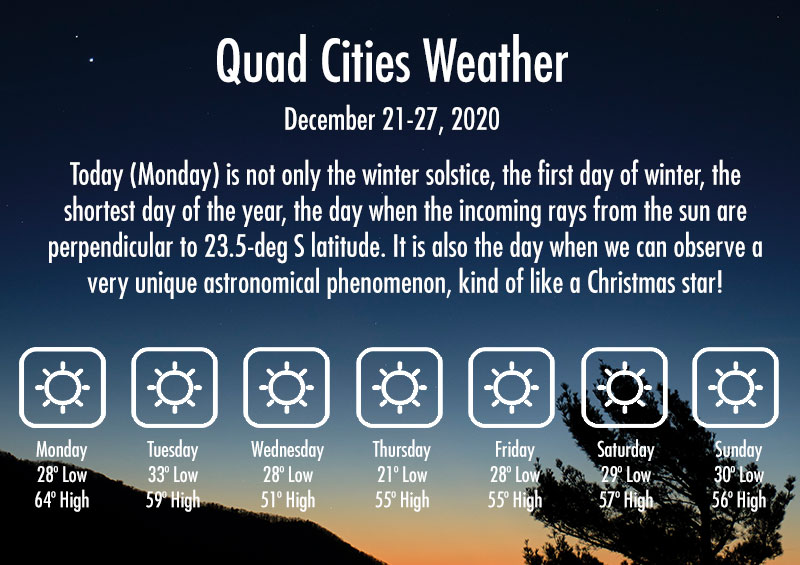 A few clouds, but mostly sunny this week.

Sunny and dry for most of the week, although breezy at times.

Mostly sunny and mild today to Tuesday, with highs in the low to mid 60s, morning low on Tuesday near freezing. Some high clouds and southwest breezes developing during the afternoon Tuesday, shifting to northwesterly then northeasterly from Tuesday evening to Wednesday. Mostly sunny but much cooler on Wednesday, with a high in the upper 40s and morning lows Wednesday and Thursday morning in the low to mid 20s. Slightly warmer on Thursday through the rest of the week, with highs in the mid 50s and lows in the upper 20s to lower 30s. It will become mostly cloudy on Thursday and will remain partly cloudy the first half of the day on Christmas with a very slight chance of light rain or snow showers. No accumulation is expected at this time, and the coming weekend will be mostly sunny and dry.

Today is not only the winter solstice, the first day of winter, the shortest day of the year, the day when the incoming rays from the sun are perpendicular to 23.5-deg S latitude. It is also the day when we can observe a very unique astronomical phenomenon, kind of like a Christmas star! I am not an astronomer, but the astronomers are saying that the “Great Conjunction” will occur this evening, when Jupiter and Saturn will appear to nearly touch each other from the vantage point of Earth. In other words, Earth, Jupiter and Saturn will be aligned in nearly a perfect line. It has been almost 400 years since the last time the three planets have become so perfectly aligned. This phenomenon can be observed this evening just after dark (between 6 and 6:30 pm) above the horizon to the southwest. 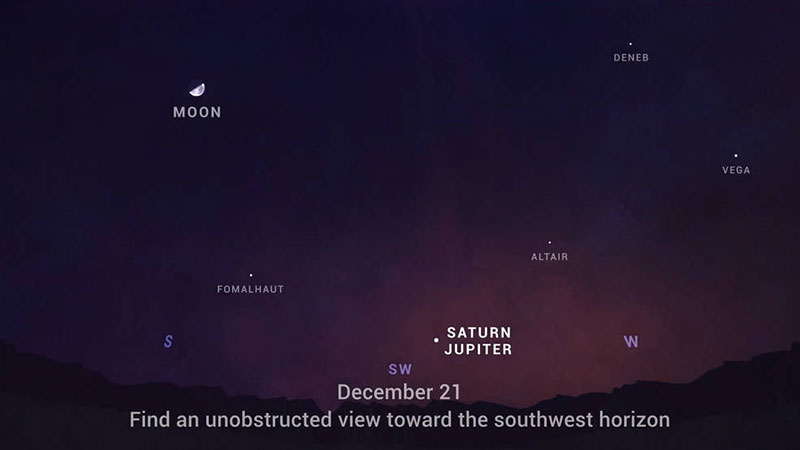 The weather should cooperate for those who wish to view the Great Conjunction, as skies are expected to be clear this evening and temperatures unusually warm for this time of year. My friends in the Humanities department tell me that there are other great conjunctions to enjoy today…such as the words “and”, “or”, and “but”. ;) 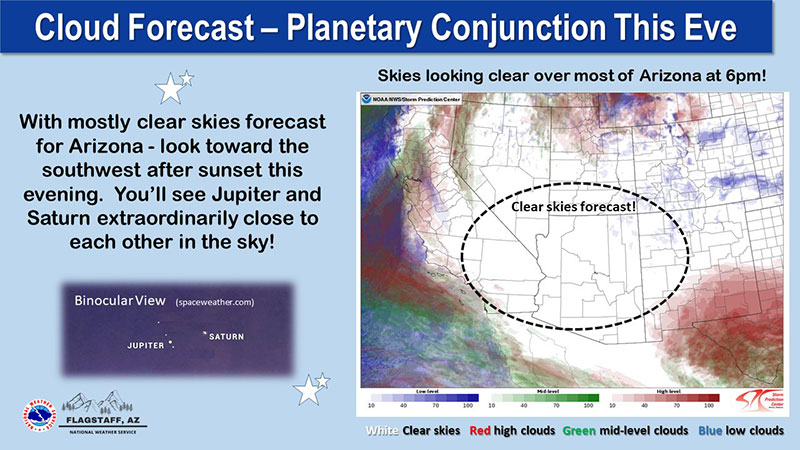 Tuesday will see some increasing high clouds and southwesterly breezes as another dry cold front is expected to move across Arizona by Tuesday evening. After the cold front passage, the winds will shift to a northwesterly, then northerly, then northeasterly direction on Wednesday, with temperatures becoming about 15 degrees cooler.

Temperatures will become slightly warmer Thursday through the weekend. A weak trough will shift across Arizona from west to east on Thursday – Friday, bringing considerable high clouds on Thursday and partly cloudy on Friday morning. There is a very slight chance of some light rain or snow showers on Friday (Christmas) morning before skies clear, but no accumulation is expected. Here’s hoping that we see a few rain drops or snowflakes on Christmas during the mid to late morning hours…

The weekend will be mostly sunny and dry, but next Monday – Tuesday, we could see a precipitation event with measurable rain/snow possible.

Have a wonderful holiday week!