Weather: More of the Same Featured 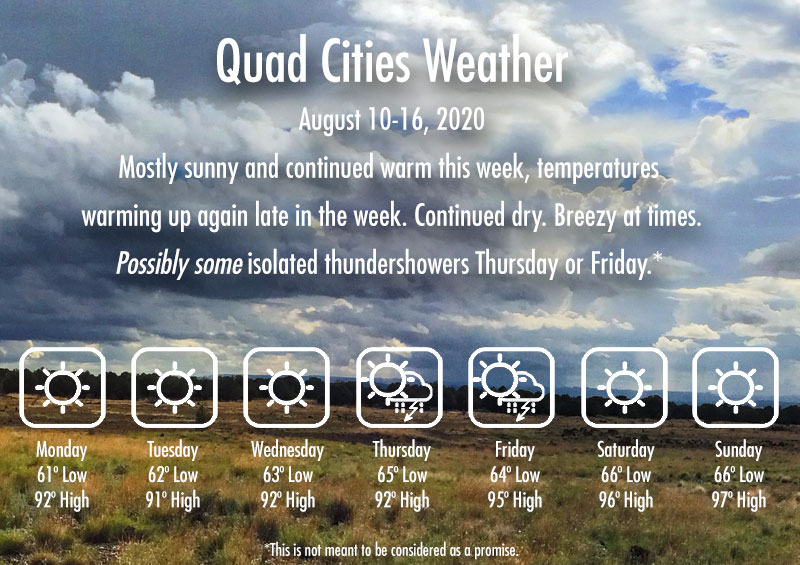 There just might be some isolated showers Thursday or Friday.

Mostly sunny and continued warm this week,with high temperatures warming up again late in the week and near record heat for the coming weekend. Overnight lows in the mid 60s, warming into the upper 60s by the weekend. Afternoon breezes at times, especially during the first half of the week. Continued dry, except for possibly some isolated showers or thunderstorms around Thursday to Friday.

This monsoon continues to be unusually warm and dry as westerly winds have dominated the weather patterns. This strange behavior may be explained by the anomalously warm sea surface temperatures in the north-central Pacific Ocean (shown in red shading at https://www.ospo.noaa.gov/Products/ocean/sst/anomaly/) and the anomalously cool ocean temperatures between the Hawaiian Islands and the coast of Southern California (shown in blue and white shading on the link provided). The consensus among our meteorology faculty here at Embry-Riddle is that these abnormal ocean temperatures are likely helping to create an atmospheric response with prolonged ridging (or high pressure over the north-central Pacific Ocean) and troughing along the California coast. The result of this pressure pattern has been frequent periods of dry southwesterlies and westerlies across Arizona that have inhibited the development of a persistent monsoonal flow thus far this season.

High pressure will rebuild later this week and start to usher in moist southerly on Thursday, only to become centered right over Arizona again for the weekend, bringing another round of near record high temperatures due to subsidence and compression within the high. We can only hope to see a better flow pattern next week if the high pressure system in the upper atmosphere can shift further north into Utah.

NOAA’s Climate Prediction Center is forecasting that we will experience an “extremely active” hurricane season over the Atlantic Basin late this summer and fall, which could have major impacts on the southeastern and eastern US (https://www.noaa.gov/media-release/extremely-active-hurricane-season-possible-for-atlantic-basin).