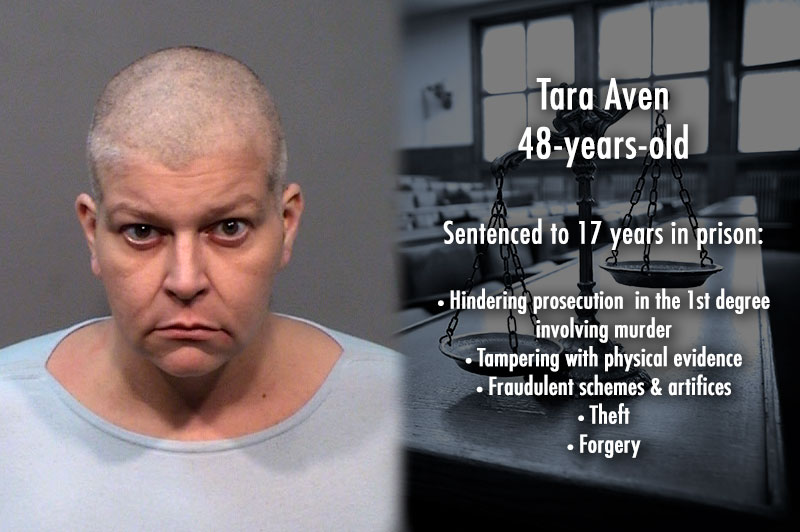 Aven’s mother, who had been murdered  in 2016, was found in a back bedroom

The Honorable John D. Napper of the Yavapai County Superior Court has sentenced 48-year-old Tara Lynn Aven of Prescott to 17 years in the state prison. Aven pled guilty on June 1, 2020, to the charges of Hindering Prosecution in the First Degree Involving Murder, Tampering with Physical Evidence, Fraudulent Schemes and Artifices, Theft, and two counts of Forgery.

The charges against Aven stem from the April 2019 discovery of her mother’s body in her home located at 607 Country Club Drive in Prescott. Sandra Aven, age 74, was found in her residence in a decomposed state with duct tape around her wrists and ankles and a loose piece of duct tape near her mouth.  Within two months of Sandra Aven’s death, Tara Aven moved into the home where Sandra’s body remained in a back bedroom, in part due to the desire to conceal Sandra’s murder as well as to continue to illegally profit from Sandra Aven’s money and property without authorization.

The investigation revealed that Sandra Aven was murdered in September 2016, that Tara Aven learned of the murder shortly after it occurred, and actively covered it up. The investigation also revealed that Aven had engaged in a pattern of financial exploitation of her mother, both before and after her death, routinely collecting her mail, bank statements, and rent checks, and improperly spending her funds.

The Yavapai County Attorney’s Office expressed gratitude to the Prescott Police Department for their investigation of these crimes. “The Prescott Police did an excellent job investigating this case and uncovering the mystery of the disappearance of Sandra Aven. We are grateful for their work in keeping our neighborhoods safe,” said Sheila Polk, Yavapai County Attorney.