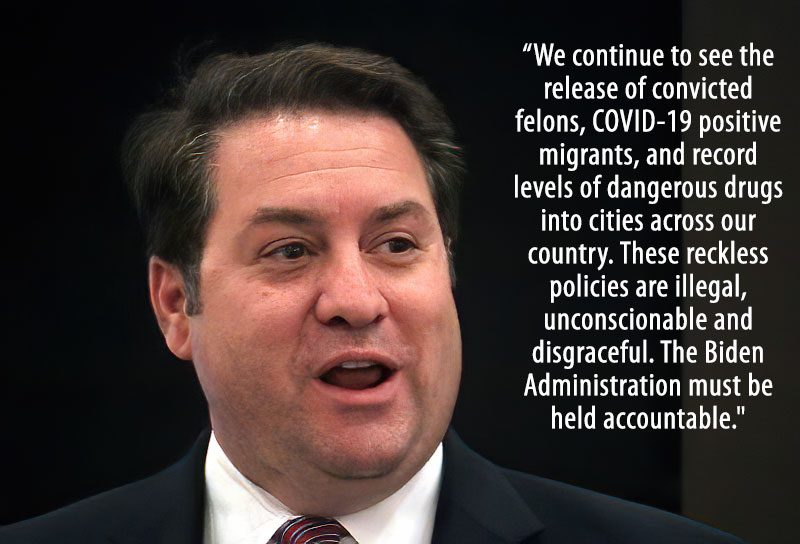 Due to many Biden Administration policies, illegal immigrants are being incentivized to come to the US

PHOENIX - Attorney General Mark Brnovich is leading a coalition of 16 states to stop the Biden Administration’s so-called “Interim Guidance” which drastically and intentionally curtails enforcement of immigration laws. The policy dramatically halts nearly all deportations and immigration-related arrests, including for those convicted of dangerous aggravated felonies. Attorney General Brnovich and the coalition are asking the Fifth Circuit Court of Appeals to deny the Biden Administration’s request for a stay pending appeal so that President Biden’s illegal refusal to enforce immigration laws will be halted while the Administration’s appeal is ongoing.

“The Biden Administration continues to intentionally violate federal immigration laws and endanger all Americans,” said Attorney General Mark Brnovich. “We continue to see the release of convicted felons, COVID-19 positive migrants, and record levels of dangerous drugs into cities across our country. These reckless policies are illegal, unconscionable and disgraceful. The Biden Administration must be held accountable."

In their amicus brief, the attorneys general detail how the Interim Guidance is fueling the border crisis and directly harming their states. The Administration’s refusal to enforce immigration laws is creating enormous law enforcement expenses for the states. Additionally, the Interim Guidance is posing a serious public safety risk to citizens. ICE officers are averaging just one interior arrest every 2.5 months. In Arizona, deportations for those outside of "priority categories," including aggravated felons, have dropped by 98 percent since the “Interim Guidance” went into effect.

The Interim Guidance has also resulted in ICE lifting detainers on criminals who have completed their sentences. Instead of being deported, as required by law, they are released into communities, without any warning to the public and put on community supervision, paid for by taxpayers. In Arizona, the crimes for which the Biden Administration will no longer seek to deport violators for include: arson, armed robbery, misconduct involving weapons, and aggravated DUI. Over 6% of Arizona’s state prison populations (2,434 noncitizen inmates) currently have ICE detainers lodged on them.

The attorneys general argue that the Interim Guidance is incentivizing illegal border crossings because migrants know that if they get caught, and even if they commit a violent crime, they won’t be deported. Since the policy was implemented in February 2021, apprehensions along the southern border have increased every month. In July, the U.S. Border Patrol reported more than 200,000 encounters with migrants along the U.S. Mexico border—the highest figure in 21 years. In stark contrast, encounters numbered only around 78,000 in January, and 41,000 in July 2020. The United States Department of Homeland Security (DHS) itself even recently admitted in a sworn declaration that it is “encountering record numbers of noncitizens ... at the border” that “have strained DHS operations and caused border facilities to be filled beyond their normal operating capacity.”

The Interim Guidance is in direct violation of federal law (8 U.S.C. § 1231), which mandates that ICE “shall” remove an alien, who has received a final deportation order, from the United States within 90 days. As recently upheld this summer by the Supreme Court of the United States (SCOTUS) in a separate case (Johnson v. Guzman Chavez) “shall” means “must,” i.e. it is mandatory language. But the Biden Administration effectively reads “shall” to mean “may—and usually won’t.”

The coalition points out the Biden Administration’s consistent disregard for the rule of law, citing its recent moratorium on evictions. SCOTUS previously ruled the Biden Administration couldn’t extend the ban without congressional authorization but did so anyway despite President Biden admitting that his extension was “not likely to pass constitutional muster.” In that observation he was absolutely correct, with the Supreme Court holding that challengers to the extension were “virtually certain to succeed … on their argument that the [Administration] exceeded its authority.”

The attorneys general wrote: “The border is in crisis. This Administration is increasingly and alarmingly lawless. And the States continue to suffer escalating irreparable harm as the border slips further and further away from the Administration’s control. This Court should deny Federal Defendants’ motion for a stay pending appeal.”