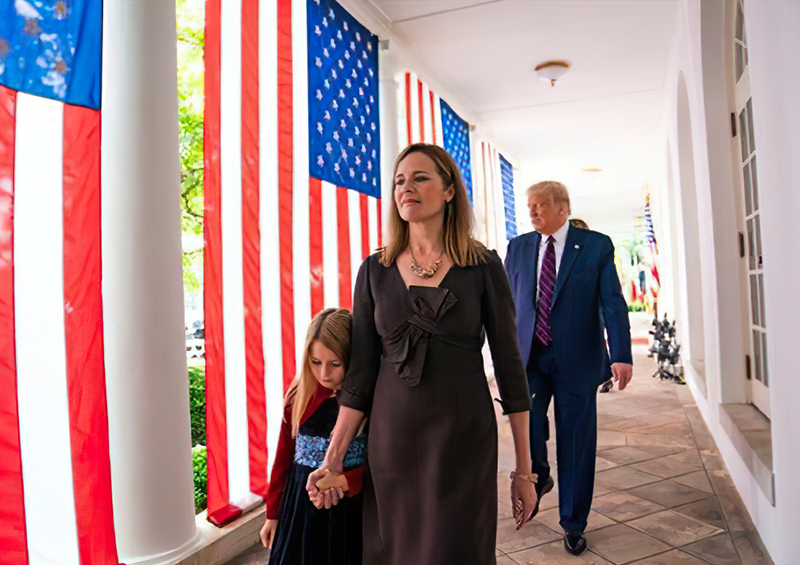 President Trump has fulfilled his Constitutional role, now he is asking the Senate to act on theirs

"Yesterday’s announcement by President Trump to nominate Federal Appeals Court Judge Amy Coney Barrett to the U.S. Supreme Court is already being hailed by conservatives nationwide as a brilliant choice. Unlike her predecessor, a far left activist and occasional adherent to the Constitution, Judge Barrett is an accomplished jurist and principled legal scholar who has demonstrated a steadfast dedication to interpreting and upholding our beloved Constitution as written -- and not legislating from the bench. She adheres to the ideology of Justice Antonin Scalia, for whom she clerked. “His judicial philosophy is mine, too,” Barrett said of Justice Scalia. “A judge must apply the law as written. Judges are not policymakers, and they must be resolute in setting aside any policy views they may hold.”  President Trump has nominated an amazing person to fill this important seat who will faithfully interpret the Constitution.

The American people deserve a fully operational Supreme Court in order to ensure the functions of our government remain unimpeded as it enters into the Fall 2020 work schedule -- where the Court will prepare to take up issues such as Obamacare, the Second Amendment, the right to life, and possibly even the Presidential election itself.

There are cries from the Left that the American people should have a choice in the selection of their next Supreme Court Justice, demanding a delay in a confirmation until after the 2020 election.

To them I say two things:
1. The American people need not be lectured on decorum and respect for the Constitution by the Marxist Democrat Party that has spent the last four months shredding the Constitution, rioting, looting and setting American cities ablaze.

2. The American people already spoke in 2016 when they elected Donald J. Trump as President and a Republican majority in the Senate. The people further spoke when they expanded that majority in 2018.

Exit polling from the 2016 election shows that a majority of those who saw the President’s ability to nominate justices to the high court as the most important factor in their vote, backed Trump. Their voices deserve to be heard!

Unlike in 2016, the current makeup of the White House and the Senate are congruent and unambiguously reflect the wishes of the American people. We cannot be intimidated by the radical calls from the Left for a delay in the confirmation process. It is the President's duty to nominate Supreme Court Justices and the Senate's duty to advise and consent.

Following a complete assessment of her merits, the Senate should vote on her nomination without delay."

Background:
Last Friday, on September 18, 2020, U.S. Supreme Court Justice, Ruth Bader Ginsburg passed away due to complications from pancreatic cancer, leaving a vacancy on the Supreme Court. President Trump and Senate Majority Leader, Mitch McConnell announced plans to immediately move forward with a nomination and confirmation process of a new Justice before the 2020 election. Unwarranted calls of hypocrisy quickly arose from the those on left, juxtaposing the Republican controlled Senate's treatment of this vacancy compared to the 2016 vacancy left by Justice Antonin Scalia. That year, the Senate chose not to act on President Obama's nomination of Judge Merrick Garland to fill the vacancy, leaving the seat vacant until after President Trump's election --citing long-held, election year, precedent.

That precedent being, in years when the Presidency and Senate are held by opposing parties -- creating a conflict between two branches of government -- the historical norm is to wait until after the next election to confirm a new Justice, allowing the people to resolve the conflict with their votes.

In years when the Presidency and Senate are held by the same party, however, the historical norm is different. In this circumstance there is no conflict between two different branches of government, and no need to wait for a new election.

This the historical precedent that applies in 2020, and why the Senate will move forward with hearings and a vote.

“I’m thrilled to see President Trump nominate Judge Amy Coney Barrett to the United States Supreme Court. Judge Barrett is a brilliant jurist who’s committed to Constitutional originalism in the same style as the late Justice Antonin Scalia, whom she clerked for early in her accomplished legal career. In her time as a professor of law at the University of Notre Dame and serving on the U.S. Court of Appeals for the 7th Circuit, Judge Barrett has shown herself to be the standard-bearer of textualism and someone Americans can trust to interpret the Constitution as it is written. I urge the United States Senate to act on their constitutional role and move forward with her confirmation without delay.”