This Week With Gosar: Biden Wants to Take Away Your Self-Defense Featured 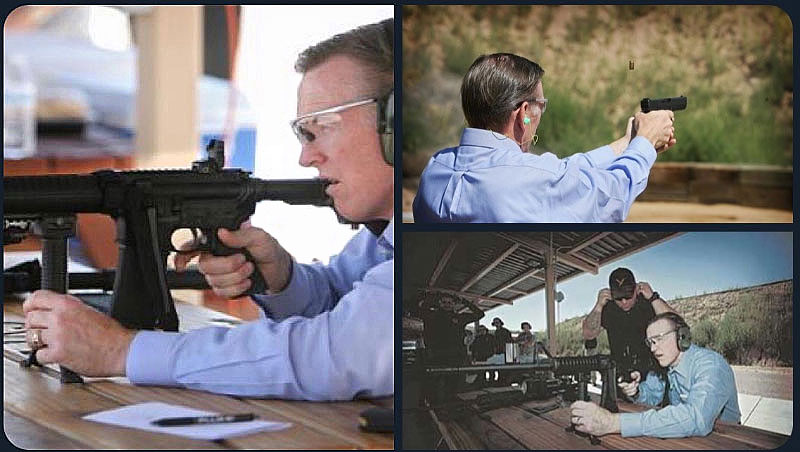 Gosar travels throughout his district during the Easter work week.

The Easter district work period concluded this week.  I’ve been busy traveling throughout the district meeting with the best people in Arizona, my constituents.  Here are some highlights:

The right to self-defense is basic to humanity.  It is also a civil right that cannot be infringed.  "When it comes to self-defense, it is better to have the power and not need it than to need it and not have it."

Mr. Biden, and his socialist toadies, are hell-bent to disarm Americans and render us weak and vulnerable, subject to any criminal, strongman, or thug.

"For every idealistic peacemaker willing to renounce his self-defense in favour of a weapons-free world, there is at least one warmaker anxious to exploit the other’s good intentions."

The mark of a tyrant is disregard of the rule of law.  Biden said yesterday, regarding your enshrined right of self-defense, “No amendment to the Constitution is absolute.”

Mr. Biden is attempting to rewrite our nation’s history and undermine our Constitution, with a special emphasis on eliminating the Second Amendment.  The Second Amendment is essential for the preservation of our freedom. Yet, the Biden Administration announced a series of executive orders this week intended to make it more difficult for law-abiding gun owners to obtain or keep their weapons. This kind of thinking is dangerous to our liberties, including the Second Amendment.

Click here to read my press release in response to Mr. Biden’s latest attempt to take away your rights.

After nearly two years of review, I am pleased to share that the United States Postal Service (USPS) has recently announced plans to either relocate or expand its retail facility and carriers facility or move them into one building due to growth in Prescott Valley.  Because of the significant population growth over the past 25 years, the current buildings are too small and expanding in the current location may not be viable. Therefore, the Postal Service informed me on March 29 that they will be looking for land to either purchase or lease to build a new facility or lease or purchase an existing building within Prescott Valley.

With future population growth expected many citizens in Prescott Valley have rightfully expressed concerns with the existing postal facility including traffic congestion, long wait lines, inability for residents to easily and quickly pick up or drop off packages, and inadequate parking.

I have worked closely with Mayor Palguta and members of the City Council to encourage the USPS to move forward with an analysis to ascertain the need for new postal facilities for the residents of Prescott Valley.  In 2019, I sent a letter to the USPS highlighting my concerns and demanded they take action to address issues associated with the post office’s current operations.  I am pleased the Postal Service listened and appears ready to take the next steps.

Soon, the USPS will be mailing a postcard to the community discussing the issues and allowing the public 30 days to make comments, appeals, or suggestions.  This is an exciting and important next step.  During this comment period, I encourage everyone to send comments and suggestions.  After the 30 days, The USPS will announce its final decision and the project is expected to be completed by the Fall of 2022.

This is a great win for the residents of Prescott Valley! Be on the lookout for the postcard in the mail and let your voices be heard.  In the meantime, I will continue to work in collaboration with Mayor Palguta and our local leaders to ensure the USPS moves forward in a timely manner.

This week, I announced that five communities throughout our congressional district would be receiving much-need real infrastructure federal grants.  They include:

$508,086 from the Department of Transportation to Mohave County to reconstruct the access road for the Laughlin Bullhead International Airport;

$154,696 from the Department of Transportation to the Town of Wickenburg to reconstruct the taxilane at Wickenburg Municipal Airport;

$1,860,000 from the Department of Transportation to the Prescott Regional Airport to complete the new passenger terminal at Ernest A. Love Field and to provide economic relief funds for costs related to combating the spread of COVID-19.

These funds are critically important to ensure our communities continue to receive support for long-term priorities, including conservation and economic vitality. 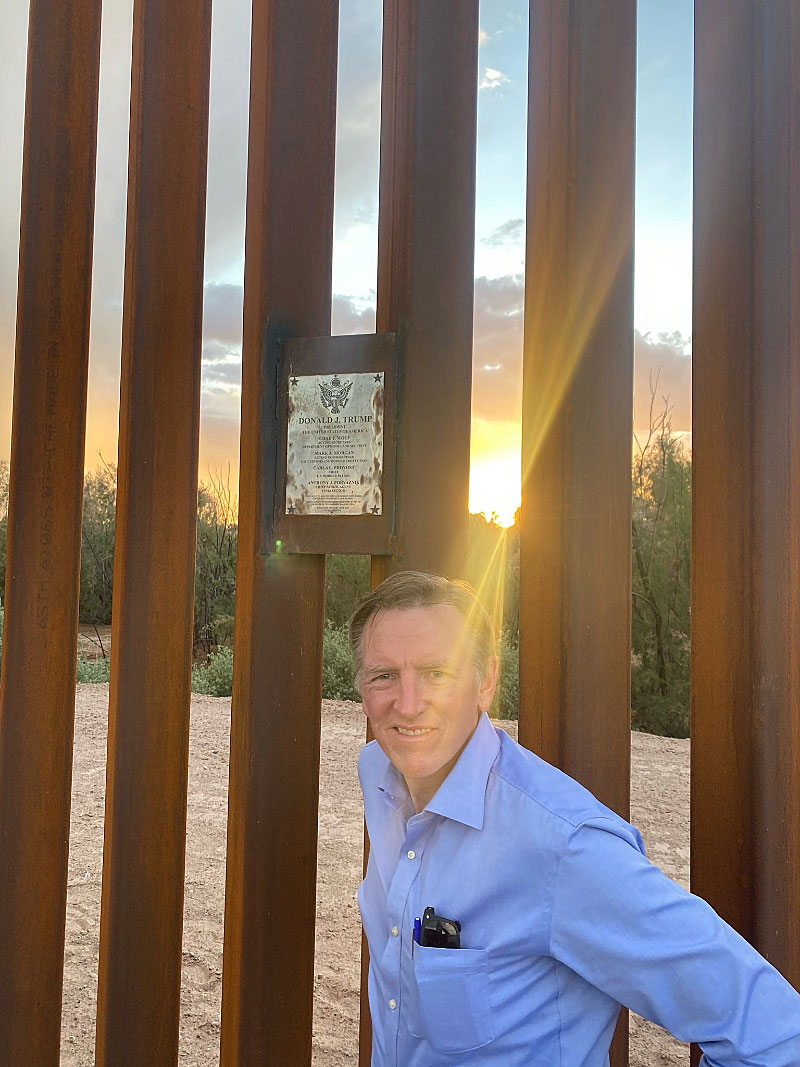 Recently, I went to Yuma to survey the damage of the Biden border crisis myself.  Besides seeing the surge of illegal aliens crossing the border, I also witnessed piles of taxpayer-funded border wall sections lying in mountainous heaps in the desert because Biden halted its construction. If you have ever been on a construction site, you know that these materials are valuable and when left unguarded they become prey to theft and vandalism.

To address this issue, this week I sent a letter to the Government Accountability Office (GAO) requesting that it inventory all the unused border wall material to ensure we completely account for these taxpayer-funded resources.

Recently, the Biden Administration admitted that resuming wall construction would be beneficial to halt the surge of illegal aliens crossing the border. We must make sure all the resources you paid for and which Congress appropriated are accounted for and ready to go to address the continued border crisis.

Click here to read a copy of the letter I sent to the GAO.

UPDATE:  I still have not heard back from the White House regarding my invitation to Mr. Biden to visit the border in Yuma.   It’s been 3 weeks.   I will keep you updated.

TRIVIA:  President Trump personally inspected the border situation in Yuma twice in 2020.  Mrs. Harris, the new Border Czar, other than laughing about her assignment, has yet to visit. 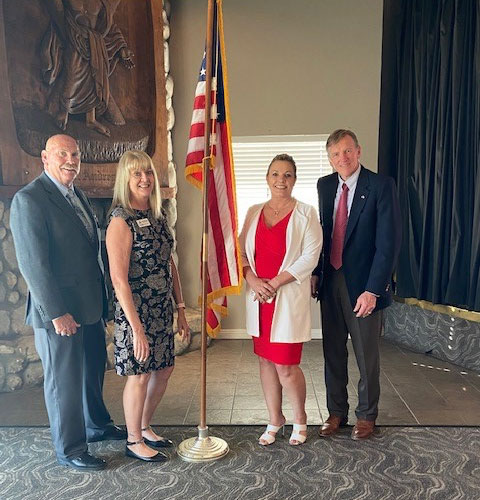 Later in the week, I had the pleasure to attend and speak at a business roundtable hosted by the Lake Havasu Area Chamber of Commerce.  A great crowd of business leaders attended, and we discussed several important topics including Mr. Biden’s crippling plans to raise taxes on businesses, the impact the COVID-19 shutdown and the harm of the Biden, Pelosi and Schumer spending spree has on small businesses.

Litigation and more, costly regulations are already crippling small businesses with red tape and bureaucracy. But did you know that Congress has now spent the equivalent of 15% of GDP responding to COVID-19?  Sooner or later, all of this wasteful, government spending will take an economic toll on our business community. The best economic stimulus is to end the lockdowns, open businesses back up, and get government out of the way of small businesses and entrepreneurs.

Thank you to the Lake Havasu Area Chamber of Commerce and to everyone who attended!