PA Delegation Tours the Audit, Says 'It Is a Model to Follow' Featured 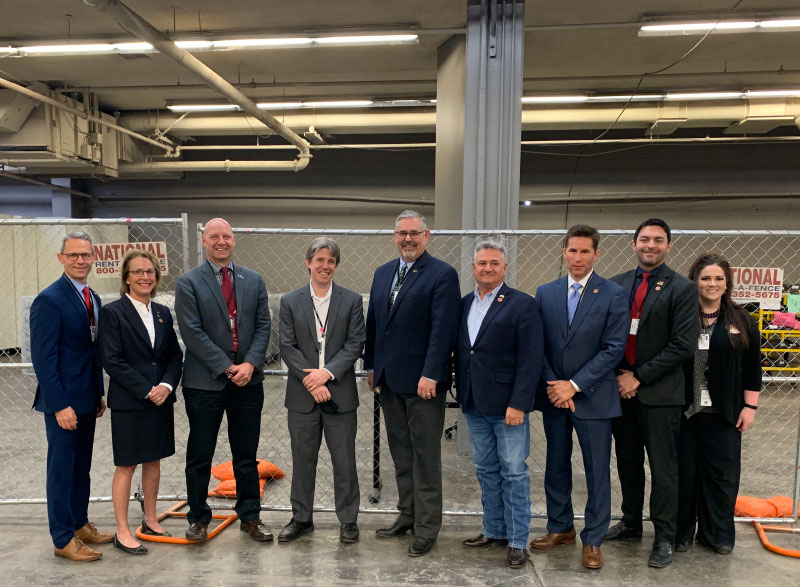 Pennsylvania Senator Doug Mastriano: "My impression of this right here is, this is the way you do it.”

On Tuesday, June 1, it was announced that a delegation from the Pennsylvania legislature would be touring the Maricopa Election Forensic Audit taking place right now in Arizona.

Senator Doug Mastriano from Pennsylvania posted this information on Twitter: 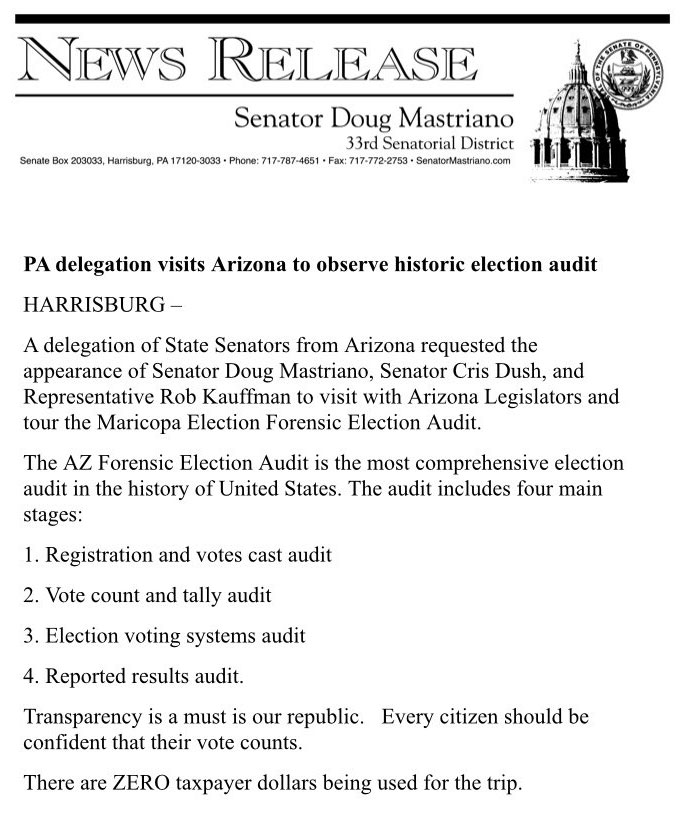 Pennsylvania Senators Chris Dush and Doug Mastriano and Pennsylvania Representative Rob Kauffman arrived Wednesday morning to learn about the audit. They met with Arizona Senators Sonny Borrelli and Wendy Rogers, as well as Representatives Jacqueline Parker, Leo Biasiucci and Joe Chaplik. After a meeting in which they discussed election integrity, they went to the audit site for a tour.

The Pennsylvania delegation did the tour without the Arizona legislators, however, according to Senator Rogers:

After the tour, Senator Mastriano was very impressed with what he saw and the process being used in the audit, reports the Gateway Pundit.  They heard “...details about the historic audit, and the measures taken to ensure security, transparency and accuracy," as well as the logistics of the audit procedures.

Mastriano commented, “I gotta tell you: I’m impressed. This is a model for any audit in any nation or the world.”

"The takeaway for Pennsylvania and the rest of the nation is that our elections need to be secure,” Mastriano said. "People should be able to walk into the ballot box thinking 'my vote counted, my voice was heard'. If we got nothing to hide, Let’s do this."

Senator Wendy Rogers had a long, detailed thread of 13 tweets about what happened during the tour. We have reproduced it below, but you can also read it at this link:

Cyber Ninjas is precisely what kind of firm to be able to lead this audit?

- They are an application security company, which has allowed a quick understanding on (2/13)

- Their modus operandi is to perform Threat Modeling.

- That is: They figure out ways a system can be attacked.

- How to identify a threat and protect against it.

activity did or didn't happen.

-This was used in designing the audit scope.

Steps to the AZ Audit

- There have been innumerable reports of mismatch (4/13)

- Was the voter registration history changed?

- Actual ballot counting: Everyone can relate to the concept of counting paper ballots.

Maricopa volunteer counters must have voted in the Nov 2020 election. No determination (5/13)

whether the counter volunteer is a Republican or a Democrat.

If a count is off by more than 1 person per 50 ballots counted, then the ballots are recounted

- It takes approximately 8 seconds to count a ballot. There is no way to coordinate or sully this very precise (6/13)

process.  "There is no speed without accuracy."

- Determines which oval was marked and if marked by a human.

- Every last ballot should be able to be accounted for.

Bottom Line:  Opposition pushback may be (8/13)

an indication of the more questionable areas to investigate.

- Digital capture of all voting systems provided is completed.

-  Analysis of the data captured is ongoing.

-  Numbers from various phases will be compared against the certified results.

2. A judge's scope of expertise does not tend to include higher math or computer systems.

3. However, EVERY American understands how to count and for the counting to be done at the local community level.

4. We should go to paper only.

6. We should declare voting day a national holiday, so everyone can vote and participate in the counting.

7. Even Canada's federal election is paper only.

What now could Pennsylvania (PA) do, if it wanted to pursue a comprehensive AZ-level audit?

Arizona welcomes ALL states to adopt this gold-standard of a process to ensure free and fair elections for 2022. (13/13)

This audit may find: 1. A perfectly run election/confirmation of results. 2. A good election with some problems but not critical or outcome determinative. 3. Or serious flaws. Everyone should want to find out the truth. @AZGOP @kelliwardaz @Leo4AzHouse @SonnyBorrelli @FannKfann —">https://t.co/MX6uAUYmsr