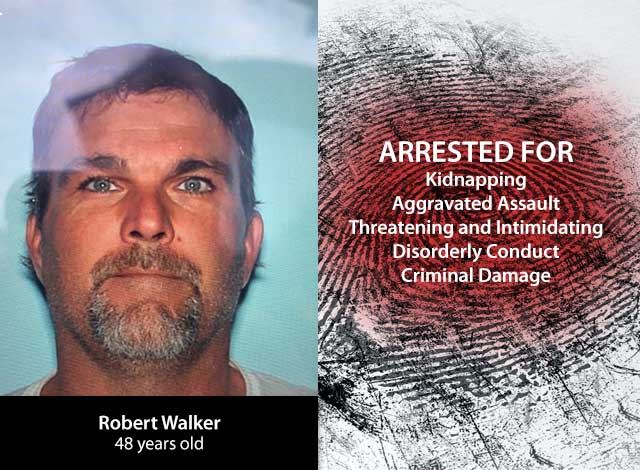 After a victim reports being assaulted and held against her will, Prescott Police searched for the suspect.

On Thursday August 20, 2020 at about 645 am officers responded to a call of a possible victim who had walked into the lobby of the La Quinta Inn located 4499 East Highway 69 and was bleeding from her face and possibly her head.  Prior to officers arriving on scene a male subject came inside the lobby and left with the female victim.  Officers located a van that the two individuals have been living in just a few hundred yards from the hotel in the nearby wooded area.  They conducted a search of the location and could not locate the two subjects, information led us to believe that the male subject was forty-eight year old Prescott resident Robert Walker and the female was possibly his girlfriend.

Today at around 0640 hours, officers responded back to the wooded are in an attempt to locate the two individuals.  Upon arrival officers located both of them and the suspect immediately fled the area on foot with officers giving chase before losing sight of him in the woods.  The victim was contacted and interviewed regarding the previous day and she reported that she was assaulted by the suspect, held against her will with a knife and was threatened by him if she tried to leave.  She was transported back to the station for victim assistance and an interview by Detectives.  During interviews the victim indicated that when the suspect fled he was armed with a knife in his hand and made statements about not going back to prison.

Walker was booked into the Yavapai County Jail on the following charges, Kidnapping, Aggravated Assault, Threatening and Intimidating, Disorderly Conduct and Criminal Damage.

We would like to thank the Prescott Valley Police Department and the Yavapai County Sheriff’s Office for their assistance during this incident.