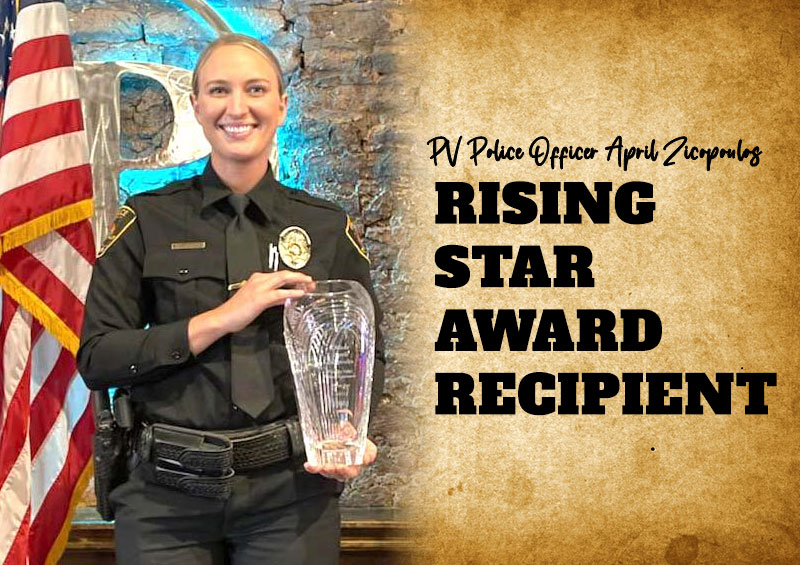 Prescott Valley Police Officer April Zicopoulos was awarded the “Rising Star Award” at the annual Celebrating Women in Yavapai County Law Enforcement banquet in Camp Verde on September 12. The Rising Star Award is given to a full-time female law enforcement officer with less than five years of service, who embodies the best qualities of a law enforcement professional.

During her tenure, Officer Zicopoulos has been the primary case officer on numerous incidents in which she has used her previous experience as a victim’s advocate to conduct complete and thorough investigations resulting in arrests and successful prosecution of offenders. When Officer Zicopoulos is not assigned a call for service, she remains proactive in traffic enforcement and DUI investigations, and always makes herself available to assist her squad mates with their calls for service. As a result of her accomplishments, Officer Zicopoulos was named the department’s “Rookie of the Year” in April 2022.

Officer Zicopoulos grew up in Williams, AZ and graduated from Williams High School. She attended Northern Arizona University in Flagstaff and graduated with a bachelor’s degree in Criminal Justice.

Prescott Valley Police Department can be contacted at (928) 772-9267 for non-emergencies, 911 for emergencies. Yavapai Silent witness is 1-800-932-3232.
IF YOU SEE SOMETHING, SAY SOMETHING!
Rate this item
(0 votes)
Last modified on Sunday, 18 September 2022 01:14
Published in Prescottvalleyaz.news
Tweet
Tags
« Prescott Valley Police Department is Hiring The YavaLine Regional Transit System Has Arrived, Oh YAV! »