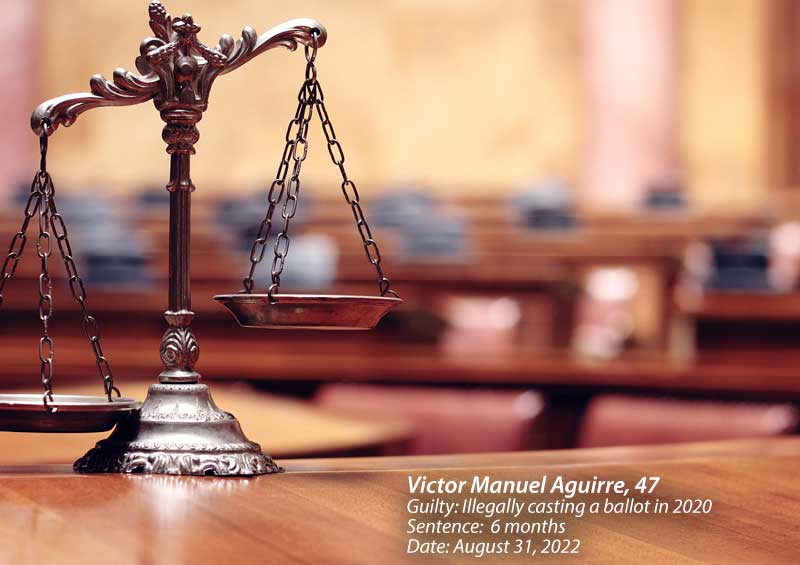 Aguirre Falsely Completed a Voter Registration While an Inmate

TUCSON – Attorney General Mark Brnovich announced that Victor Manuel Aguirre, age 47, of Sahuarita, was convicted and sentenced to prison for illegally casting a ballot in the 2020 General Election on August 29, 2020. Pima County Superior Court Judge Javier Chon-Lopez sentenced Aguirre to six months in the Arizona Department of Corrections. Aguirre entered a guilty plea to one felony count of Attempted Illegal Voting on July 26, 2020.

Aguirre had been charged by a State Grand Jury in August of 2021, which alleged that Aguirre falsely completed a voter registration form while he was an inmate in the Pima County Jail in September of 2020. Aguirre completed a registration form indicating that he had not been convicted of a felony or that his rights had been restored. Aguirre, however, had previously been convicted of felony offenses and had not had his rights restored.

The Pima County Recorder was not aware of Aguirre’s convictions at the time he registered to vote and voted in the 2020 General Election. Aguirre’s vote was counted in that election.

Aguirre’s voter registration was revoked during the sentencing proceeding. Aguirre will need to apply to the Court to restore his voting rights after he completes his sentence in this case.

This case was investigated and prosecuted by the Arizona Attorney General’s Office Election Integrity Unit (EIU).

A copy of the sentencing agreement is available here.

A copy of the indictment is available here.